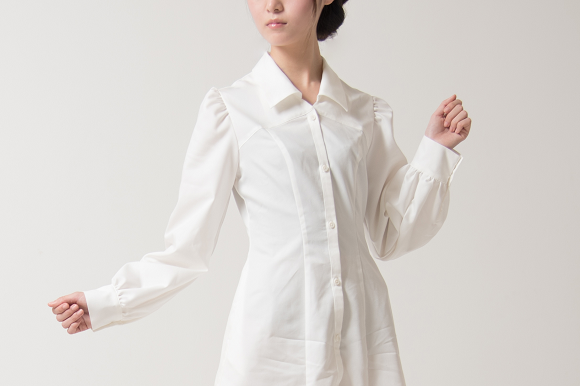 Clever alterations make this a better choice than anything hanging in your boyfriend’s closet.

Japanese and Western fashion preferences don’t always perfectly align with one another. However, there is some overlap in tastes, and you’ll find plenty of people in both regions who think there’s a special mix of playfulness and cuteness in a woman slipping on an oversized man’s shirt and wearing it like a dress.

But thanks to Japanese designer Gomi Hayakawa and fashion label Double Chaca, there’s no need to go raiding a guy’s closet to pull off the look. Hayakawa, who’s also contributed designs for small-bust lingerie brand Feast, has recently unveiled her latest creation. Called the “Hubby One-Piece,” the dress keeps several visual cues from a man’s dress shirt, but makes a few key adjustments to make it a viable garment to wear out and about.

The dress if form-fitting in the torso and down to the small of the back, but loose in the sleeves and near the hemline, providing a slimming and relaxed look. Meanwhile, hidden snaps keep the openings along the front of the dress securely closed, so as not to let the wearer’s skin peek out between the gaps in the buttons.

The other half of Hayakawa’s spring lineup for Double Chaca is the Little Tail One-Piece. The fishtail design may not be as unique as that of the Hubby One-Piece, but it still makes for a breezy, feminine look that’s versatile enough to be paired with various styles worn underneath the sleeveless dress.

Both dresses are available in the two colors seen here, with the Hubby One-Piece priced at 23,000 yen (US$204) and the Little Tail at 21,000 yen. Orders can be made online through retailer Lavi Shop beginning on the evening of March 13, and for those who can’t wait that long, both dresses will also be offered for sale at the pop-up Lavi Shop at Tokyo’s Laforet Harajuku between March 7 and 16.

Interested? Drop us a mail and we’ll order one for you.

Rocketnews 24, slightly edited by a soon to be fired employee of JWS 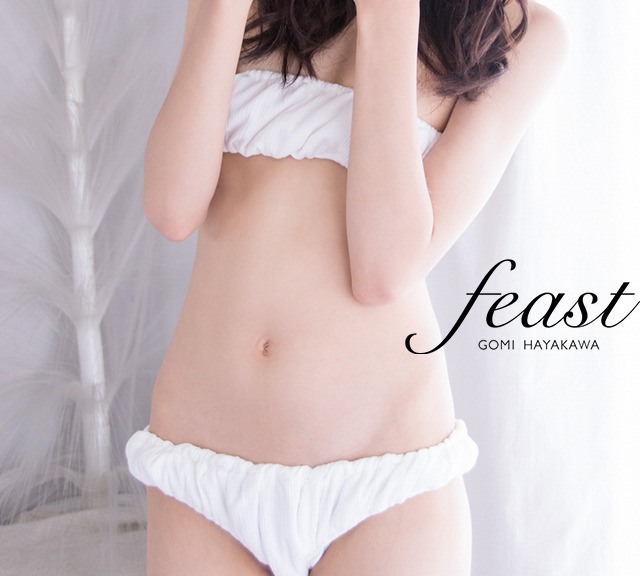 “Why should only big-breasted girls get all the fun of lingerie shopping?” is apparently the question that led Japanese fashion school student Gomi Hayakawa to design and sell these stylish lingerie sets, tailor-made for flat chested girls, under the brand name of “Feast.”

Now, I understand that, in English, “flat-chested” has mildly derogatory connotations (imagine how a guy would react if you described him as having “micro junk” or something), but trust me, in this case I’m literally just directly translating. Japanese has so many words for varying sizes, textures and shapes of breasts your head will spin.

When one is able to describe breasts in one word with the same amount of detail a sommelier might describe the varying flavor notes of a particularly complex wine, well then, it’s no wonder Japan has a bit of a breast-loving reputation.

Anyway, it turns out Hayakawa’s designs are answering a serious market need, as small-chested ladies from Japan over hustled to the home page to place their orders, totally overwhelming Hayakawa and her small staff within hours of the shop going online.

Hayakawa, a mere Freshman at her fashion school, no doubt expected her lingerie sets to hold little more than niche appeal, as she has announced she’ll be running out of supplies after one more round of orders. But, Japan being a capitalist nation, we can imagine she’ll find some way to boost supply if demand keeps rolling in.

It’s nice that, here in boob-obsessed Japan, the (not as plentiful as you think) small-busted ladies now have a tailor-made product to help them feel sexy in their nightwear too. Just remember to be careful about who you wear it around, girls.

Hayakawa doesn’t  accommodate shipping to foreign countries, but we do, so if you want to get your hands on the whimsically-named “Fairy Feather” or “Angelic Wing” sets, you can check if they’re still available here.

Fill out this form and see if we can help you.