Now you and your kids can experience the fun of owning a cat without any of the hairballs!

Kids these days sure do get some high-tech toys. Gone are the days of the Furby and the Tamagotchi — now we have actual moving, expressive robots! It’s all the good stuff about having a pet without any of the hard work.

For example, toy company Takara Tomy’s latest robotic pet, Hello! Woonyan, goes on sale in Japan next month. According to the following tweet by the company, the “capricious kitty robot” has a diverse array of abilities, including the following:

“Real meowing! Real movements! It chases after your hand and its toy ball using the infrared sensors in its eyes. We’re now taking preorders for Hello! Woonyan.” 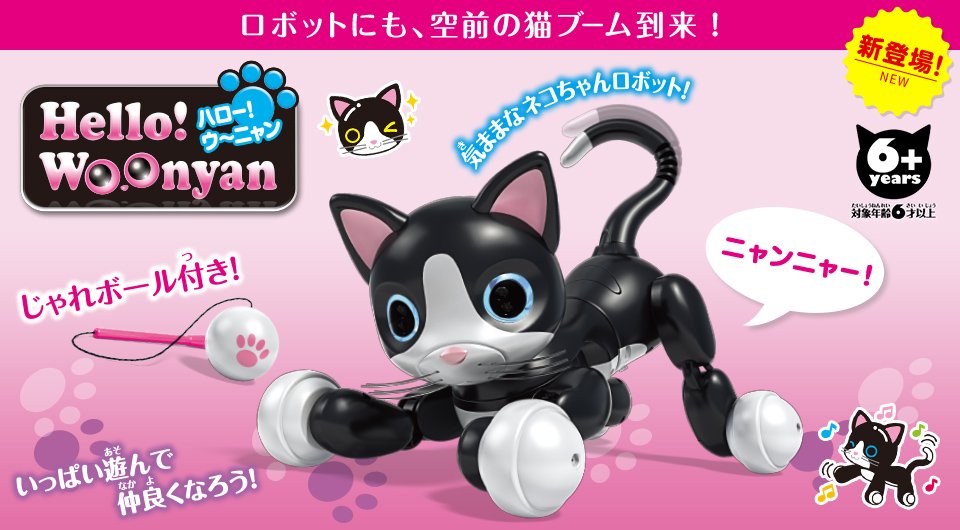 ▼ Some of Woonyan’s other tricks include changing eye colors to demonstrate mood swings, singing, dancing, and displaying hidden talents, such as barking like a dog.

Check out the following promotional video to see Woonyan in action:

▼ This commercial has taught us that kids will go positively starry-eyed when they see any robotic toy, and won’t stop staring at it…quiet kids..oh yes!

▼ …or even now. Hey, is it even possible to hypnotize a robot?

Nowadays, robotic pets are so popular that your real, living pets will beg for your attention. “Play with me, too,” your forlorn hamster squeaks…

The only thing that’s not so darling about Woonyan? Its hefty price tag of 18,000 yen (US$161). Maybe mom shouldn’t let the cat out of the bag–or the toy store–after all!

written by rocketnews 24 edited by JWS